By BAVANI M and SHALINI RAVINDRAN 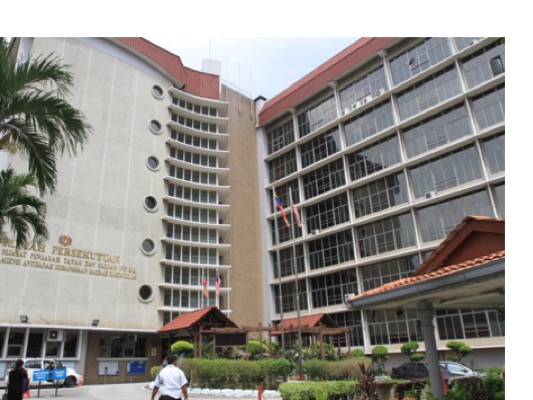 The tax is not new, but the system is. Known as parcel rent, it replaces quit rent that property owners currently pay through their respective management corporations (MC) and joint management bodies (JMB) to Federal Territories Land and Mines Office (PPTGWP).

The quit rent is billed along with the owners’ maintenance fees.

Following in the footsteps of Selangor and Penang, owners of stratified buildings in Kuala Lumpur too will soon have to pay the parcel rent directly to the land office.

However, parcel rent is only applicable to those who have separate strata titles.

Those without the separate titles will continue paying quit rent until the strata title is issued.

One of the reasons for the change was that the current system was open to abuse, said PPTGWP director Datuk Che Roslan Che Daud.

“There have been many cases where owners did not know how much quit rent they were paying as it was paid as part of their maintenance fees.

“Some JMBs or MCs were also found to set their own tax rates. They would overcharge on the quit rent so they could collect more to cover for those who did not pay, ” he said.

He added that parcel rent was a fairer system as it would take into account the floor area or size of the main parcel of a strata building.

Currently, the total amount of quit rent was divided and paid by unit owners regardless of the size of their respective units.

With parcel rent, each unit will be billed based on its size and any accessory parcel that is tied to the main parcel.

The amount is multiplied with the tax rate set by the land office. (see graphics)

Accessory parcel in this case could comprise the size and number of parking bays and even air-conditioning ledge.

However, other strata components that are classified as the common property, such as elevator, recreational area and visitor carpark, will be exempted from the parcel rent.

“There was previously some confusion as people assumed that parcel rent was another tax to be paid on top of quit rent, but this is not the case.

“Those with strata titles will have to pay parcel rent, while those without will continue to pay quit rent, ” Roslan clarified.

He explained that for homeowners at low-cost housing schemes, the parcel rent was a fixed rate regardless of the unit size, which was RM15 (for leasehold) and RM20 (for freehold) that would be applicable to the low-income group (B40).

“There are more than 70% affordable residential strata properties such as apartments or flats with an overall floor area of less than 1,030sq ft (96sq m)

“As such, the parcel rent rate for these types of properties has been drafted to allow for minimum payments of RM20 (leasehold) and RM25 (freehold) per year.

“This will benefit mostly homeowners in the middle-income group (M40), ” he added.

Che Roslan said some parcel owners would have to pay more under the recalibrated system.

“A lot of people tend to jump the gun when they see the percentage increase like 100% or 200% without realising that the actual amount could be just an increase of RM10, ” he said.

One of the significant advantages of the parcel rent system is that unit owners will no longer be tied to the commitments (payment of quit rent) of other parcel owners in the same strata scheme.

“Now, any strata title holder who wants to transfer ownership of their unit could find themselves unable to do so if records at the land office showed arrears of tax on the stratified building’s master title. 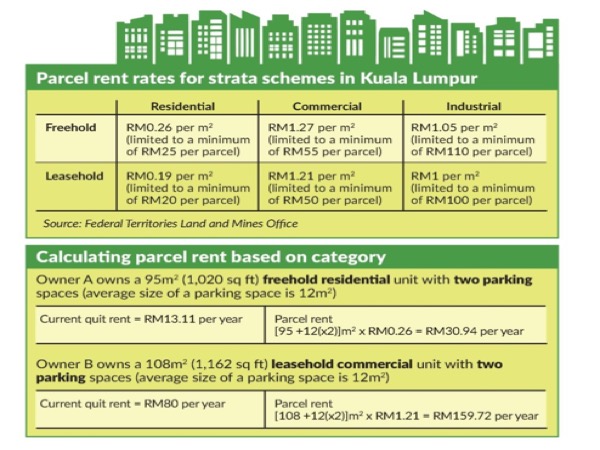 “So, although an owner was a diligent paymaster to the building management, his neighbours’ negligence would affect his intention to transfer ownership, ” said Che Roslan.

He explained that non-payment of quit rent was a common problem with strata properties.

According to PPTGWP records, there are 3,210 strata schemes in Kuala Lumpur comprising 359,087 strata parcels.

The land office expects to collect RM30mil with the implementation of parcel rent, compared to RM15mil currently. 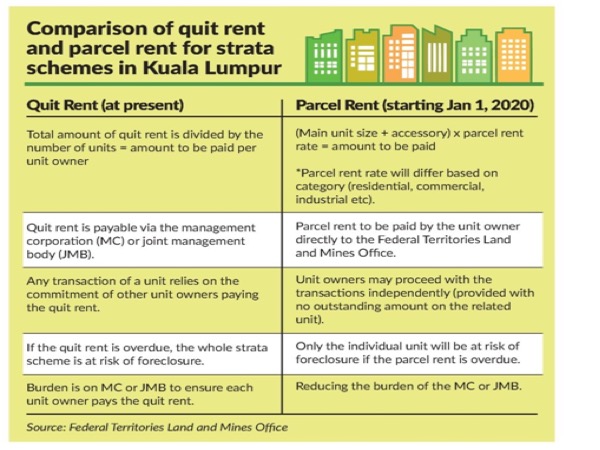 It is dealing with arrears of RM22.4mil, not including penalties for late payment which will push the amount to RM40mil.

Of this sum, RM3.9mil are arrears owed by 340 strata schemes.

Billing for parcel rent will be sent to the registered address on the strata titles, as such owners have been asked to ensure that their addresses are updated.

“We are engaging with stakeholders and non-governmental organisations and it has been well received.

“Awareness programmes are also ongoing in preparation for parcel rent so that people are ready come next year, ” Che Roslan added. Those who want to find out more about the calculations for parcel rent can call PPTGWP at 03-2610 3300/ 3306/ 3360/ 3319.